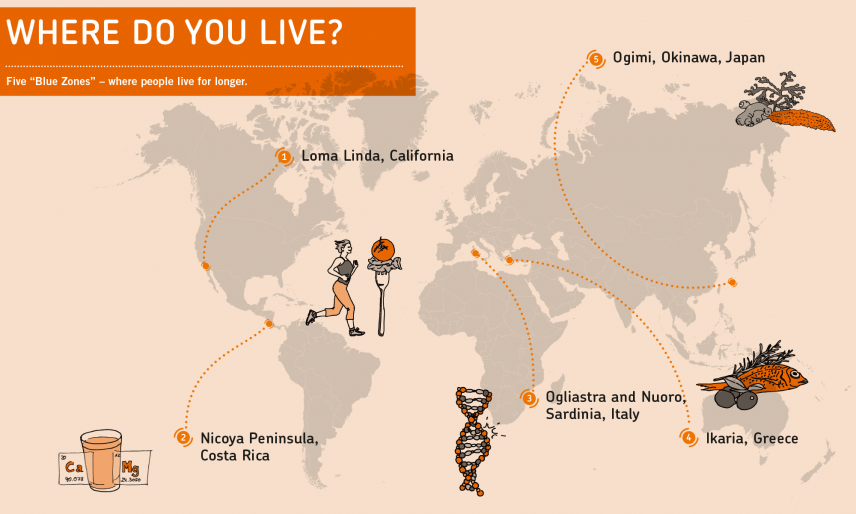 A long life is something most people wish for. In the Blue Zones, a long life is the norm instead of the exception. Where are the hotspots of longevity?

Demographic researchers Gianni Pes and Michel Poulin initially identified a Sardinian province with the highest concentration of men who lived to be one hundred years old or more. Later, on behalf of National Geographic, Dan Buettner took up the search for the hotspots of longevity – and found them. These so-called “Blue Zones” are now a trademark and a research project. Do they hold the key to a long life?

For members of the Seventh-day Adventist Church in Loma Linda, California, the body is a Temple of God which is cherished and cared for accordingly – with a vegetarian diet and plenty of exercise.

The groundwater in the Nicoya Peninsula in Costa Rica is characterised by its high magnesium and calcium content which likely contributes to the high life expectancy here – on top of the healthy traditional cuisine.

Fourteen mountain villages in the Ogliastra and Nuoro provinces in the east of the Italian island of Sardinia are home to an aboveaverage number of 100-year-olds. A genetic variation seems to be responsible for the long lives of the Sardinians.

Tea with extraordinarily large amounts of anti-oxidants, pulses, vegetables, herbs, fish, olives, fruits, feta cheese, goat’s milk – the diet in Ikaria, Greece, is the reason for the higher number of people over 90: ten times higher than the European average.

Perhaps it’s down to the “Goya” cucumber in combination with ginger and seaweed, but perhaps not. Whatever the case, in the village of Ogimi on the Japanese “island of centenarians” Okinawa, 15 of the 3,500 inhabitants are between 100 and 109.

If you’re not planning to emigrate, then you should create your own Blue Zone. Paying a bit more attention to what you eat and how you treat your own body – that’s good for all of us!

By the way: You can read all about where Germany’s 100-year-olds live here!